Russian Santas with Animals appeared in Russian culture and folklore a long time ago. In Russian bilini and skazaniya (oral stories) Russian Ded Moroz appears frequently on animals or with animals. Historically many Russian tribes, especially in the northern part of Russia dealt with animals. Bear, polar bear and reindeer played a vital role in survival of those people. That was why these and other animals, depending on their place became a part of Russian folklore and of Russian cultural tradition. The most popular animal in Santas' carvings is Russian bear. It is carved attached, detached, carved along with the body of the Santa, or on the shoulder. Sometimes Santa embraces the bear, as a person and an equal "partner". All these postures of carvings came from Russian folklore, that is how the bear is depicted there, as a friend, a little lazy but always big, powerful and unpredictable, but again, always on the side of good characters who win the "game" against dark or evil forces. The character of Russian Santas on these carvings is mixed with western Santa. You can notice that he wears a short gown decorated in flowers, sometimes furs, high and visible boots, and a fur hat. He carries a Christmas tree, or has a long stuff in hand, typical for Russian Ded Moroz. On some of the pieces Santa is accompanied by his granddaughter and helper Snegurochka, who wears blue and silver robes with sometimes a crown shaped kokoshnik (head-dress) on her head. 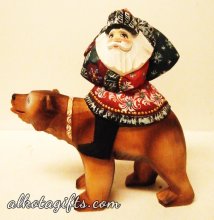 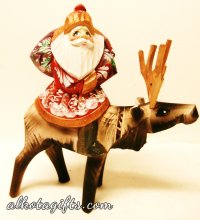 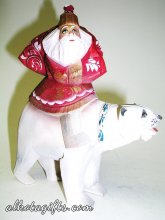 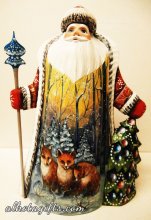 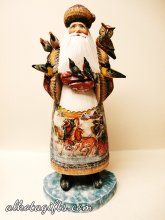 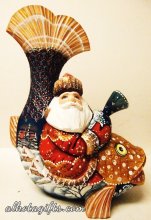 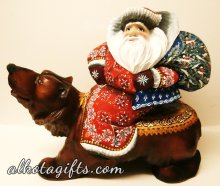 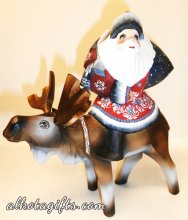 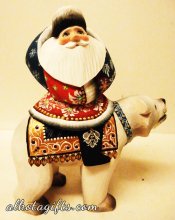 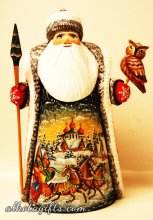